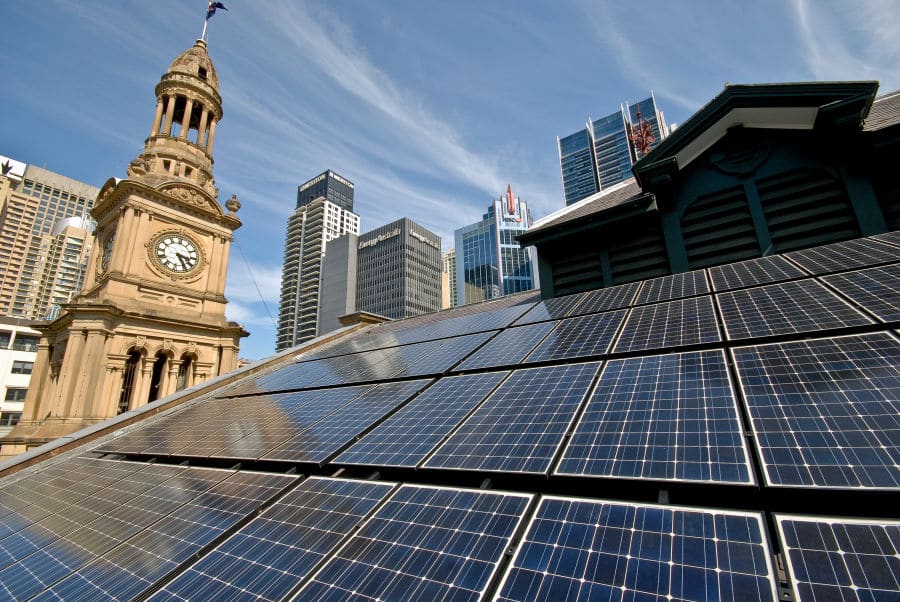 City of Sydney flicks the switch to 100% green power

From today, the City of Sydney will run entirely on renewable energy generated from wind and solar farms in regional NSW.

All the City of Sydney’s operations – including street lights, pools, sports fields, depots, buildings and the historic Sydney Town Hall – will now be run on 100% renewable electricity sourced from local solar and wind projects. The switch is part of a $60 million deal with electricity retailer Flow Power, the biggest standalone green energy deal of its kind by a council in Australia.

The deal is projected to save the City up to half a million dollars a year over the next 10 years, and reduce carbon emissions by around 20,000 tonnes a year – the equivalent to the power consumption of more than 6,000 households. The City calculates that the new deal will see it reach its 2030 of reducing emissions by 70% by 2024, six years early. “We are in the middle of a climate emergency. If we are to reduce emissions and grow the green power sector, all levels of government must urgently transition to renewable energy,” Lord Mayor Clover Moore said on Wednesday.

The power purchase agreement will see the City source renewable energy from the 120 MW Bomen Solar Farm in Wagga Wagga, the 270 MW Sapphire Wind Farm near Inverell, and the 3 MW Shoalhaven Solar Farm, a not-for profit community-owned solar scheme near Nowra on the south-east NSW coast. The deal will see three-quarters of the City’s power sourced from wind generation and one-quarter from solar.

“This is a landmark achievement for the City of Sydney. If organisations can follow in the City’s footsteps, a net-zero carbon future is achievable,” Flow Power CEO Matthew van der Linden said. “The City is directly matched to these renewable projects, a move that supports the integration of renewables into the system.”

One of the first projects in Australia to install bifacial panels, the Bomen Solar Farm began exporting to the grid in March. The project was acquired last year by electricity network infrastructure owner Spark Infrastructure, in the company’s major strategic shift towards owning renewable energy generation assets. In addition to the PPA with Flow Power, the Bomen project has a second PPA with Westpac, as part of the bank’s commitment to a 100% renewables target.

The second solar asset cover by the deal, the Shoalhaven solar project is being developed by Flow Power in partnership with local community group Repower Shoalhaven, a not for profit volunteer community enterprise that develops community solar projects. With a construction cost of close to $5 million, the coastal solar farm will deliver additional investment to the region and provide local employment opportunities during construction and operation. The project will generate enough energy to power close to 1,000 NSW homes.

“Shoalhaven solar farm could not have become operational without the City’s investment. By partnering with this project, we’re creating local jobs and helping the renewables sector grow,” said member Bob Hayward, on behalf of Repower Shoalhaven.

Since 2016, the City has been investing in energy efficiency initiatives, such as installing rooftop solar and LED lights, which has translated into significant savings for ratepayers. Replacing 6,500 street lights with LEDs, for example, has saved ratepayers $800,000 a year.

One of its most notable projects to date is Alexandra Canal Depot in Alexandria, which is powered by 1,600 solar panels and features the state’s first grid-scale Tesla battery, which can store up to 500 kWh of electricity. The City of Sydney and Transgrid were the project partners realizing this application as part of a behind-the-meter energy storage trial.

On top of that, the City has installed solar panels on more than 30 of its office buildings, pools, libraries and community centers, including Sydney Markets (8,594  panels), Andrew (Boy) Charlton Pool (85 panels), Sydney Town Hall (240 panels), Redfern Oval (211 panels), Australia Post building on Cleveland Street (1000+ panels), Surry Hills Library (32 panels), as well as the International Convention Centre Sydney in Darling Harbour, which is home to a community-funded 520 kW solar PV installation. At the Darling Harbour array, the solar panels are owned by members of the general public.

By mid-2021, the City plans to have more than 7,800 solar panels generating power for its buildings. It has also partnered with Ausgrid to fast-track the upgrade of 9,500 utility-owned street lights to LED, which will save around $1 million in annual maintenance and energy costs.